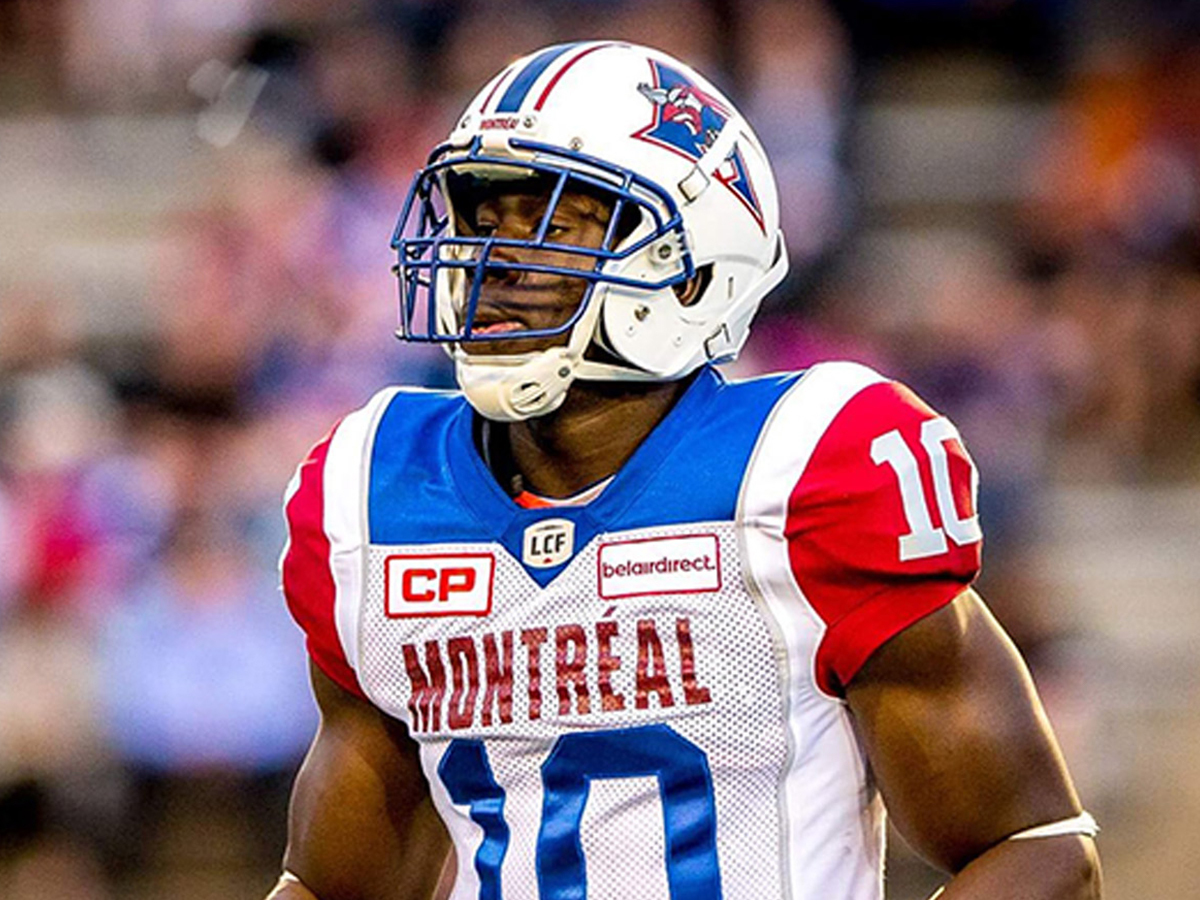 Cambridge, Ontario’s Chris Ackie started playing football at the age of 10. After his first season, he knew that he wanted to play professionally one day. His hard work and determination made that dream a reality in 2015 when Ackie was selected fourth overall by the Montreal Alouettes in the CFL Draft. A versatile player, he plays linebacker and safety for the team.

When not playing, the 25-year-old Ackie keeps busy with Motivated Society – a youth developmental football program that he created last year in his hometown that runs during the CFL offseason. We spoke with Ackie about giving back to the community, being mentally prepared to work and how teamwork leads to success both on and off the field.

GO MAGAZINE: Please tell us about Motivated Society. What inspired you to start the program?

CHRIS ACKIE: Motivated Society is a company and brand about encouraging and inspiring youth. We provide group athletic training to accelerate youth football development. Our main objective is to teach young athletes the essential skills needed to succeed. I grew up playing football in Cambridge, and we didn’t have any local youth football camps. I wanted to give back to the community in the best way I knew how, and I believed a football program would accomplish that goal. The coaching staff and I enjoyed our time coaching the athletes last year so much that we immediately began contemplating the 2018 camp, and couldn’t turn down the opportunity to do it again.
In the near future we plan on expanding the camp to other cities.

Why do you feel it’s important to give back to the community?

Growing up in Cambridge, I was surrounded by the support of an amazing community. That support enabled me to pursue my passion and ultimately become a professional football player. I believe it’s vital for people to reinvest in their communities, while offering support and opportunities to other hopefuls and the next generation. Hopefully, they too can achieve success and bolster their communities.

One of Motivated Society’s goals is to create a community where players can grow together and hold one another to the highest of standards. Can you tell us more about this?

The idea of growing together and holding one another to the highest of standards is extremely important. It’s no secret that football is a competitive sport. But I think the most important feature of football is that it’s a team game. That being said, the success a team has is very dependent on how the team members work cooperatively, rather than individually. With Motivated Society, we want to maximize the athletes’ development during each session, and therefore 100% effort is expected. When someone isn’t striving to get better, it takes away from the development and growth of others. This is a demonstration of how the actions of one person can directly affect many. As a team, the common goal is to get better. By holding each other accountable, we can encourage each other to leave everything on the field and set ourselves on the right path to achieve our goal. For the coaches at the camp, when it’s all said and done, we like knowing that we’ve helped instill qualities in young individuals that they can use beyond the football field.

In your own career, what are some of the biggest hurdles you’ve faced?

A few games into last season I tore my tricep and had to get season-ending surgery. The surgery was the easy part. The difficult part was having to go to physiotherapy everyday and not getting discouraged when my body wasn’t healing at the pace I thought it would. Luckily, I was fortunate to be surrounded by a great support team that kept me motivated and positive during the recovery process.

Beyond your athleticism, what makes you a great football player? How do these skills carry over to other facets of your life?

When I was younger, I relied solely on my athletic ability to be a good football player. To be a professional, I realized that I’d have to take time to prepare mentally for games as well. This is when I started to watch game film of the other teams and studied the game. By game day, I knew everything about the opponent, which made me a better player. In my everyday life, my ability to prepare has been very beneficial. I feel more organized which helps me tremendously when taking on all the tasks associated with running Motivated Society.

To me, a great leader is someone who can motivate and lead by example. The same can be said for a great teammate. Having strong leaders is what pulls a team together. My years of playing football have taught me that you can’t succeed as an individual; you need the support of your teammates to achieve the end goal of winning.

Strong leaders come in various forms. When most people hear the word leader, they immediately assume you have to be this loud and charismatic individual in order to gain the respect of your teammates. Although I’ve encountered many charismatic leaders that did a great job leading their team, I’ve also encountered many individuals that lead by example. These leaders don’t drop movie quotables that people remember and their voice can’t be heard from the other side of the field; however their leadership doesn’t go unrecognized because they always have a positive attitude and they are there for their teammates and put them ahead of everything.

Have you made any New Year’s resolutions? What can we expect from you in 2018?

I’ve never really been the type to make New Year’s resolutions. However, in 2018 I want to continue to grow as a young man and a football player. I also want to continue to be a motivation for the young children growing up in Cambridge. I love my city and I’m always willing to sit down and talk to the youth and do anything that can help motivate the younger generation.

I last purchased insurance online and the process was fairly simple. The only thing I would suggest is that every insurance company have an accident forgiveness concept. Though I haven’t personally been affected by this, I know some drivers who have been forced to rely on public transportation because they couldn’t afford auto insurance because of an accident they experienced in the past.