Ashley Callingbull: Dream Big and Show the World What You’re Made Of 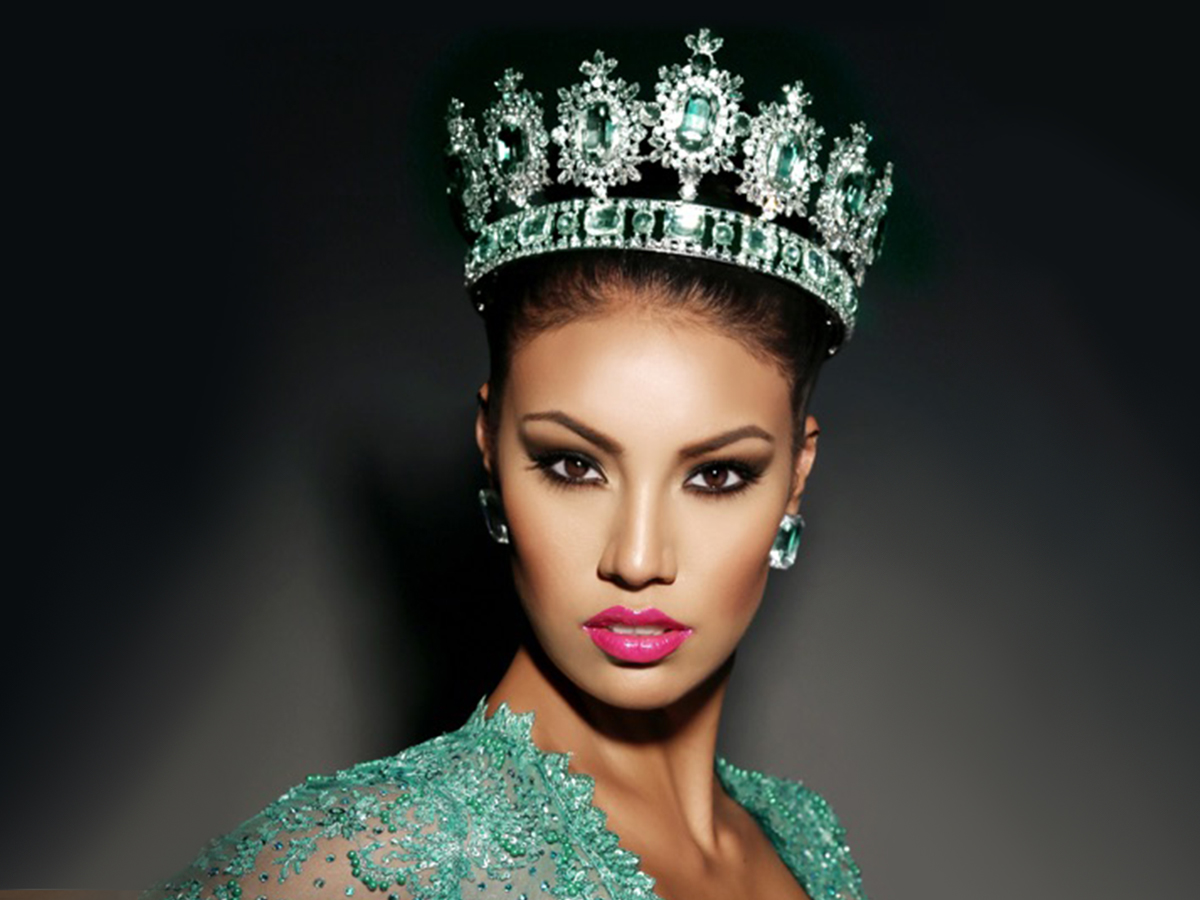 When meeting new people, we’ve all been asked “So, what do you do?” For Ashley Callingbull, a much easier question to answer would be “What don’t you do?”

Hailing from Alberta’s Enoch Cree Nation, in 2015 Callingbull became the first Indigenous woman and the first Canadian to win the Mrs. Universe pageant. That in itself is an impressive achievement. But Callingbull is also an actress, model, brand ambassador, activist, motivational speaker, event host, is involved with a number of charities and youth organizations and much more.

Callingbull appeared in the award-winning TV series Blackstone and was one half of the first First Nations team to compete on Amazing Race Canada. She’s a spokesperson and brand ambassador for companies like Nike, Hillberg & Berk and RW&CO. She has done a TED Talk and also spoken at Harvard University. She works tirelessly to bring attention to issues affecting Indigenous communities and environmental causes. She received a Role Model Award from the United Nations and David Suzuki has called her his hero. The list goes on and on, and at only 30 years of age, she still has lots more that she wants to accomplish.

Callingbull spoke with us for Go Magazine about being fearless, breaking barriers and building a strong brand.

My grandmother said to always dream big and show the world what I’m made of. She told me that at my high school graduation. That was the last thing she attended before she passed away, so it just stuck in my head forever. Now, I always think, ‘Why not? Why can’t I do these things? Why can’t I chase these big dreams?’ I want to show her and the world what I can do.

You spent lots of time competing in different pageants including Mrs. Universe. What are some of the most important lessons that you took away from that?

I learned that presence can really make or break you. Presence is just so important because you’re not only an ambassador, you’re a role model as well. You’re automatically putting yourself into this position that’s going to have a lot of responsibility.

Pageants are extremely critical and taught me to take criticism really well. I noticed that with pageants, the most important thing for me was to always speak loud and proud and I’ve taken that with me in every other aspect of my life.

What are some of those tips that you’ve picked up over the years to deal with feedback and criticism?

The thing that I’ve learned is that there are often a lot of noes until you get to that one yes. So regardless of what people say, if you feel like you’re doing good, then that’s good.

In pageants, people are overly critical of you and want you to be what they think is perfect. I’m always going to make myself happy first and will always be proud of my culture, my strength and the things that make me different from everyone else. And if they don’t like it, they don’t like it. I’m not going to mold myself into what society thinks is perfect because that doesn’t make me unique. It doesn’t make me stand out, and that’s not who I am. So, with pageants, it was always about presenting who I really am and not changing for anybody.

You wear many different hats as an activist, actress, model, motivational speaker, brand ambassador, former Mrs. Universe and more. What motivates you to keep pushing yourself to try all these different things?

I’ve always thought it was important to get out of my comfort zone and see what I’m made of because throughout my life people have told me I don’t belong, I’m not good enough or I don’t deserve to be here. I’ve experienced that in acting and school, modeling, pageants – everywhere. It’s not that I’m trying to prove them wrong. I want to prove to myself that I belong wherever I want to belong. I just constantly push myself to see how strong I really am. I know that once I get out of my comfort zone, I really see what I’m made of and learn what I can do instead of just being afraid, standing back and waiting to see what happens. I’d rather just make things happen.

How has this mindset helped you strengthen your own personal brand?

It definitely keeps me open to more opportunities, and it has given me the chance to work with huge brands like Nike for example. I’ve been working with them for years as an ambassador. This opens doors not only for me, but for the kids that I work with. Whenever I choose a brand or anything like that, it’s all about who it’s going to affect.

I think having that take charge or ‘let’s do this’ mentality also opens up doors because I’m not afraid of what’s going to happen. Growing up, I lived through some really rough things – a lot of trauma, childhood abuse and poverty. I’ve already lived my life in fear growing up, and there’s no point in me doing that anymore. Now, I feel like I’m fearless. I can take on the world and make things happen for myself because the only person I can really rely on is myself. I am going to make my dreams come true.

What advice do you have for individuals or organizations looking to strengthen their brands?

I think that it’s really important to have a strong message and ambassadors that not only promote your brand, but also live that message. There are a lot of different brands out there and people promoting them, and they’re getting paid, but do they live that message? Do they actually do those things and use those products? You want someone that’s real and someone that you can relate to. Once you put out something that’s real and relatable, people will go running to it because they feel like they want to be a part of it and that it’s something that’s connecting with them.

For any brands that you work with, is there a criteria that they need to meet to make sure it’s something you can relate to and have a connection with?

I make sure that I always make it bigger than just me. If I’m working with a brand like Nike, Hillberg & Berk or RW&CO., they always have to donate and give back to the shelters or the charities that I work with because I want it to mean something. I want them to be changing someone else’s life too and not just mine. So, when I work with these brands, I want to know what they can give back to other people.

After you won the Mrs. Universe title in 2015, you wrote on Facebook – “I’m not your typical beauty queen. Look out… I have a voice for change and I’m going to use it!” Why is it important to use your platform and voice for others who aren’t being heard?

I was given this huge opportunity and this title and platform where I can create change. I’ve seen a lot of beauty queens go home and celebrate, and then they’re done. They don’t do anything more than that and they don’t have to. But with me and being Indigenous, you never see representation like that in pageantry. So, I wanted to make a stand. I wanted to have this opportunity to speak for people that weren’t being heard.

There are so many things going on in Indigenous communities that people don’t know about. And during that time there was the federal election. I went off on the government, which is something you definitely don’t expect that from a beauty queen. But I used that shock and awe to get the truth out.

I was always scared to speak out when I was a little girl because of the things that happened to me. But I realized that my voice is so powerful. It resonates with so many people. You have no idea who you’re going to affect. You have no idea who’s listening. After all that happened, so many people came up to me. They had no idea that Indigenous people were living like that. There are so many things that people haven’t opened their eyes to, but now they’re listening and have become allies. I took a lot of flack for doing that, but it was so worth it. It’s important to use your voice to create change.

Were you worried at all that speaking out could negatively impact your career?

Even before winning Mrs. Universe, I kind of had an idea of what I was going to do if I won. There were so many things that I wanted to get out there, and I wanted it to be monumental. I wanted it to be bigger than me. My family always taught me to be resilient. They said resiliency runs in our blood, to never be afraid and to live fearlessly. The pressure of being in pageants really taught me how to handle the most brutal criticism you can possibly imagine. I knew that I was going to face a lot of backlash from anyone who didn’t agree with me. But I knew what I was doing was right, and I felt it in my heart.

It’s so important to speak out against injustices that are going on in this world. You can stand for brands and empower others, but to me what’s more empowering is seeing people stand for things they believe in and speak out for those who aren’t being heard. It causes a ripple effect and you don’t know who’s going to stand up next.

It’s a new year and a new decade. What do you want to accomplish in 2020 and beyond?

I want to keep putting myself out there and making sure that I make great connections with people because you never know who you’re going to meet or what you’re going to do. And for me, it’s always about the kids and who I can help and finding more opportunities for that. Acting is also going to be a more focused thing for me this year and I’m going to put more time into it.

It’s crazy, but I never know what’s going to happen in my life and new opportunities are always coming in. I’ll be like, ‘Wow, I really didn’t see this coming but it happened.’ I always put myself out there, make myself available and try new things. That definitely changes a lot for me because if I was too scared to try something, then maybe I’d be giving up other opportunities that could arise from that initial thing.
It’s that fearless attitude that really keeps me going.

Did you need any special insurance for keeping the Mrs. Universe crown during your term?

For the crown, no. But to keep the title and the crown, I had to make sure I didn’t do anything stupid. I had to have a respectful attitude throughout, be a great role model – all those things. So, there was no special insurance for the crown. It was more just don’t do anything dumb to screw up and lose it.

Is there anything you’d like to see changed about the world of insurance?

It could be cheaper and less complicated. I have great insurance, but some people might not have the same advantages I do. It would be good if it was more affordable and available for some people and the situations that they’re in.

You can learn more about Ashley Callingbull on her official website here.