Alysia Rissling: Dreams Don’t Work Unless You Do 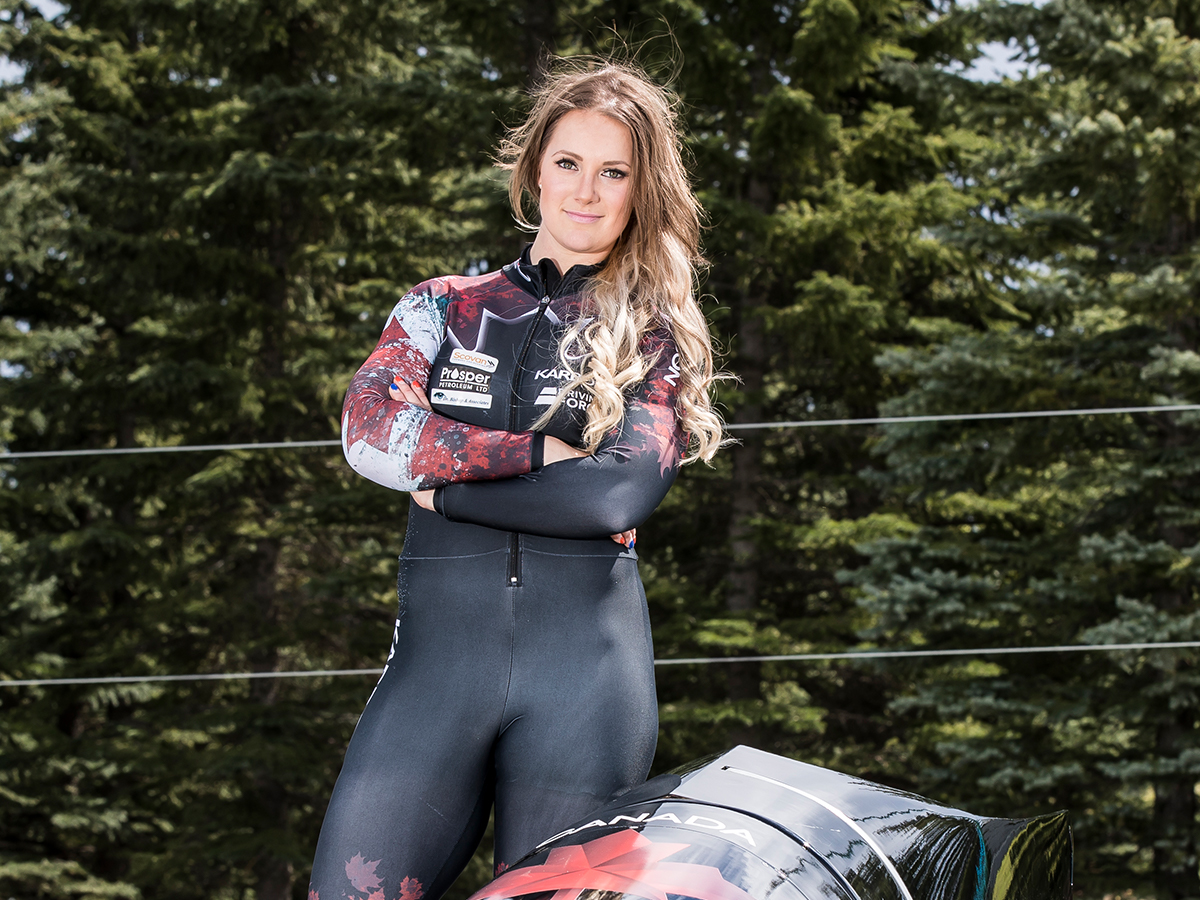 Alysia Rissling is on the verge of achieving one of her dreams. How has she accomplished this? Simply put, she busted her butt, took risks and did whatever it took to get closer to her goal.

Born and raised in Edmonton and now based in Calgary, Rissling is traveling to South Korea this month to represent Canada in the women’s two-woman bobsleigh event at the 2018 Olympics in Pyeongchang. While being an Olympian is an amazing feat for any athlete, what makes Rissling’s accomplishment even more remarkable is that she only began bobsledding in 2012.

Let that sink in for a few seconds … less than six years after starting a sport, Rissling is going to the Olympics.

A lifelong athlete, she attended the University of Alberta on a dual scholarship for track and field and basketball, but eventually decided to focus her energies solely on basketball. After graduation, she was done with basketball but not sports all together. Watching the opening ceremonies for the 2012 Summer Olympics, she realized what she wanted to do next – become an Olympian. She had heard that bobsleigh recruited older athletes and a few weeks later found herself at a bobsleigh identification camp.

From there, she trained hard, competed and pushed herself to improve and be amongst the best at what she does. Currently ranked sixth in the world by the International Bobsleigh and Skeleton Federation, we caught up with Rissling before she flew to South Korea and spoke with her about taking chances, networking and life and business lessons that can be learned from sports. We also asked her about the Canadian women’s bobsleigh team’s medal chances in Pyeongchang. Read on to find out!

GO MAGAZINE: We’re not going to lie – being a bobsleigh pilot is an incredibly cool job! What led you to this path?

ALYSIA RISSLING: It’s the coolest job! I got into the sport of bobsleigh for a few reasons, the main being I wasn’t ready to give up athletics and I knew it was a sport you could begin at an older age. I enjoy the training and I really enjoy the challenge of driving a track and going fast. I started as a brakeman, but my personality pushed me into the front seat because I like to be in control. Driving the sled is much more complicated and stressful, but also a lot more fun.

You’ve accomplished so much in the sport in such a short period of time. What advice do you have for others that want to pursue their dream, whether it be in sports, business, or something else?

To quote the movie Dumb and Dumber, “So you’re saying there’s a chance,” has been my mantra over the last six years. I’ve had to overcome some serious obstacles in this sport, most of which didn’t have the greatest odds of success, but because there was a small chance I had to try anyway. It’s shocking how many times throwing up Hail Marys has actually panned out. My advice would be to never sell yourself short on a dream. You may just surprise yourself.

How are you feeling about representing Canada at the upcoming Olympics? Is there anything you’re excited or nervous about?

I feel extremely honoured, proud, and elated to represent Canada at the Olympics. Other than competing for a chance at an Olympic medal, I think I’m most excited to walk in the opening ceremony. I know I’ll be nervous on race day, but I also know I’ve done everything possible to prepare for that moment, so I hope I’ll be able to just focus and execute our race plan.

You once said, “If I would have known how much this sport would cost me, in terms of sacrifice for my long-term career goals and actual costs, I would never have got into it.” Can you tell us more about these sacrifices and what drives you to keep bobsleighing?

My career goal is to get a master’s degree in either chiropractic or physiotherapy. But because I spend four full months on the road every winter, I can’t go to school full time while competing in bobsleigh, so I won’t be beginning a professional career until I’m in my mid-thirties.

I don’t have a stable income and sometimes I go months with no income. And amateur athletes definitely don’t get benefits or a pension. I spent most of my first years in the sport accumulating debt. Over the past five seasons I have spent around $150,000 on equipment, coaching, team fees, etc. The hardest decision was the beginning of the 2016/17 season when I decided to commit to purchasing a sled, which I was only able to do thanks to my sponsors. I had come too far and kept getting better, so I considered the purchase of a new bobsled as an investment in myself.

What drives me to keep doing it? The privilege to travel the world and represent Canada! I adore this sport.

What are some valuable lessons that bobsleigh has taught you about life and teamwork?

Bobsled has taught me that if you don’t win, you learn. I wish I didn’t always have to learn the hard way, but every bit of adversity makes me more resilient. Sport, in general, has taught me so many skills that can transfer over to business and other areas of life. I’ve learned to effectively communicate with different personalities, and figure out how to motivate people towards accomplishing a common goal.  It has taught me how to evaluate which battles are actually worth fighting, and when to put my head down and grind it out. Sport has also made me coachable, disciplined and adaptable.

Unfortunately, funding is a major challenge for many Olympic athletes. How do you balance the business side of the sport with everything else you have to do in terms of training and competing?

This is the hardest part of my job. I’m so thankful for having people who believe in me and have supported my journey. I have to make time for the business side of sport because without it I can’t acquire the appropriate equipment, pay team fees or you know … eat. I just prioritize my days and try to check as many things off my list. Usually it’s my social life that suffers, but in general I feel I do a good job balancing performance, training, therapy, business and community.

Having learned a lot about the business side of the sport over the past few years, do you have any advice to share with people entering the business world?

I have a science degree, and knew nothing about business until I started bobsleigh. I’ve been super fortunate that the Canadian Sport Institute has resources that have helped me learn as I go. I had to learn how to brand, create business proposals, create a website, market, start a business, pay taxes, pay GST and a whole lot more. The best advice I have for people entering the business world is to prioritize networking. Meet as many people as you can and collect business cards as you go. Getting started is incredibly overwhelming, but the more people you have that can help or introduce you to others that you may be able to work together with makes it much more manageable!

When you started bobsleigh, your goal was to represent Team Canada at the Olympics. With that happening this month, what are some of your next major goals?

Well my next immediate goal is to win an Olympic medal! Next year it will be to win a World Championship on home ice in Whistler. Long term in bobsleigh, my goal is to be an influencer that helps to get the four-woman event into the Olympics and continue to be an advocate for women in sport.

Bobsleigh Canada is sending three women’s sleds to Pyeongchang and our goal is to win all of the medals! I can’t speak to the exact odds, but you can bet at least one Canadian sled will be on the podium.